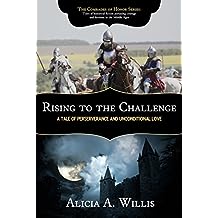 About: New difficulties arise for Sir Kenneth Dale in the exciting final installment in The Comrades of Honor Series. As a favorite of the Earl of Birmingham, his life appears tranquil – until the both beautiful Lady Clarissa and a headstrong orphan named Brion arrive in the castle. It is not long before Sir Kenneth finds himself not only in love, but also the master of the most difficult squire Birmingham has ever harbored.
Brion de Lantenac is nothing short of rebellious. Hatred for Sir Kenneth’s strict rules vents itself in constant disobedience, triggering continual clashes between himself and his new lord. But there is a reason behind his self-centered character. The murder of his family has caused heartbreak he may never recover from. Will he ever reveal his true identity to Sir Kenneth? And what about Guthrie, the man who sullied his father’s shire with treacherous hands and now seeks his demise?
Caught between a hopeless romance, a rebellious squire, and the enemies on all sides, Sir Kenneth finds himself challenged. Amidst battles, heartache, and dark mystery, he must somehow rise to meet the difficulties of his life with honor. Will he ever win his squire’s heart? Will he and Clarissa be forever separated?
Join Sir Kenneth, Brion, and all the comrades of honor in a tale of perseverance, chivalry, and unconditional love. Treachery abounds and evil seems insurmountable. Will rising to the challenge preserve honor and win the day?

My favorite character is: Like in the first books, I love all the characters. But I think my favorite is Victor who sticks close to Brion no matter what happens. He is loyal to his master, kind to others. Kenneth is a knight now who has just taken Brion as his squire, Kenneth is at his wits end with what to do with Brion, then when Brion is kidnaped Sir Kenneth finds out just how much he cares for Brion.