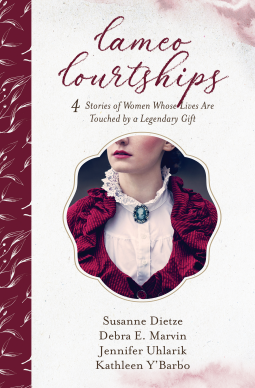 About: A Family Heirloom Inspires Romance
In 1851, a special cameo is gifted by Queen Victoria to Letitia Newton, who though considered an old maid, meets the perfect gentleman minutes after donning. Told by the Queen the cameo is to be shared, Letitia gifts the “Victoria Cameo” to a woman in her family, hoping adventure and romance will follow each of its subsequent wearers.

PINNED ABOVE HER HEART by Susanne Dietze
1851 – Pittsburgh, PA
After receiving the Victoria Cameo, aspiring journalist Clara Newton works to expose a smuggler, but reporter Byron Breaux must break the story first or lose his job. Working together is out of the question until they learn secrets that threaten Clara’s father. . .and her heart.

TAMING PETRA by Jennifer Uhlarik
1875 – Colorado Territory
Trouser-wearing frontierswoman Petra Jayne Hollingsworth has no intention of donning the heirloom cameo, but when a crooked brothel owner steals the treasure, securing its return becomes Petra’s highest priority. Assisting her, Reverend Dustin Owens is appalled to learn the price of its ransom is that Petra must work in the brothel. He may save the woman’s virtue, but can he help Petra regain her cameo and rediscover her faith?

MEET ME AT THE FAIR by Kathleen Y’Barbo
Spring 1885 – New Orleans during the 1884 World’s Fair and Cotton Exposition
It takes a Pinkerton to find a Pinkerton, and Ethan Butler has been charged with finding Elizabeth Newton. Just when he locates her, the cameo he is to deliver is stolen. It appears his previous case has discovered his presence in New Orleans, but he can’t return to that case until the cameo is found. With Miss Newton as a reluctant partner in crime fighting, can Ethan Butler locate the cameo and its thieves without losing his heart?

LENDING MY HEART by Debra E. Marvin
1895 – Pittsburgh, PA
The arrival of a handsome Scottish administrator ruins Miss Bertie Hart’s dream to oversee the new Carnegie Library children’s department. Yet bristly Mr. Russell Smart’s working-class determination and his love of books make him the perfect partner to better the lives of Pittsburgh’s poor. As for a partner in life? Not even her Victoria Cameo can narrow the social chasm he and her father keep between them.

My Favorite Character/s: I can not answer this . . . I did not have a favorite character since each was unique to their story.

My Thoughts: Each of these novellas were wonderful! The stories were so different and yet alike with their themes, and the romances were each unique and interesting. Each author did a well written and sweet story that carries their voice and tied in with the others without being the same.

The characters made quite the family with their oddities and it was near how the cameo was passed around from couple to couple. The stories were the widest variety of genres in one collection of stories I’ve seen a western, a suspense, and more.
Out of all of the stories I would say that the last story was my favorite since I fell in love with the characters a little more than the others.

I received an ARC of this book in exchange for my honest review and am truly happy to provide it — all the thoughts are my own. 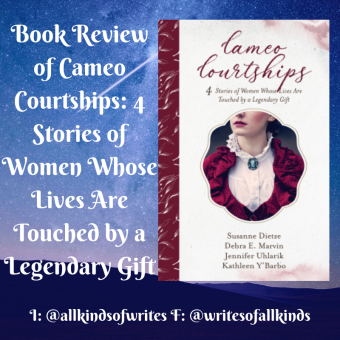